Dragonshorn Studios’ one-year anniversary celebration is approaching! Starting February 14th, we will host a celebration of our one year in the TTRPG business. because of that, we have prepared several events and initiatives to make this time special!

From February 14th to February 28th we will be hosting a charity fundraiser! During that time, 20% of all purchases (on all storefronts we sell our products) will go to support Children’s Miracle Network Hospitals® and Friends of Children’s Memorial Health Institute Association charities!

We also plan to release a special commemorative product… but we will take about it when the time comes!

During the celebration, we are going to host several streams!

We have other things planned for the anniversary too, but we want some of them to be a surprise… so look at our socials, discord and website!

February 10, 2022 Rughalt Uncategorized No comments yet 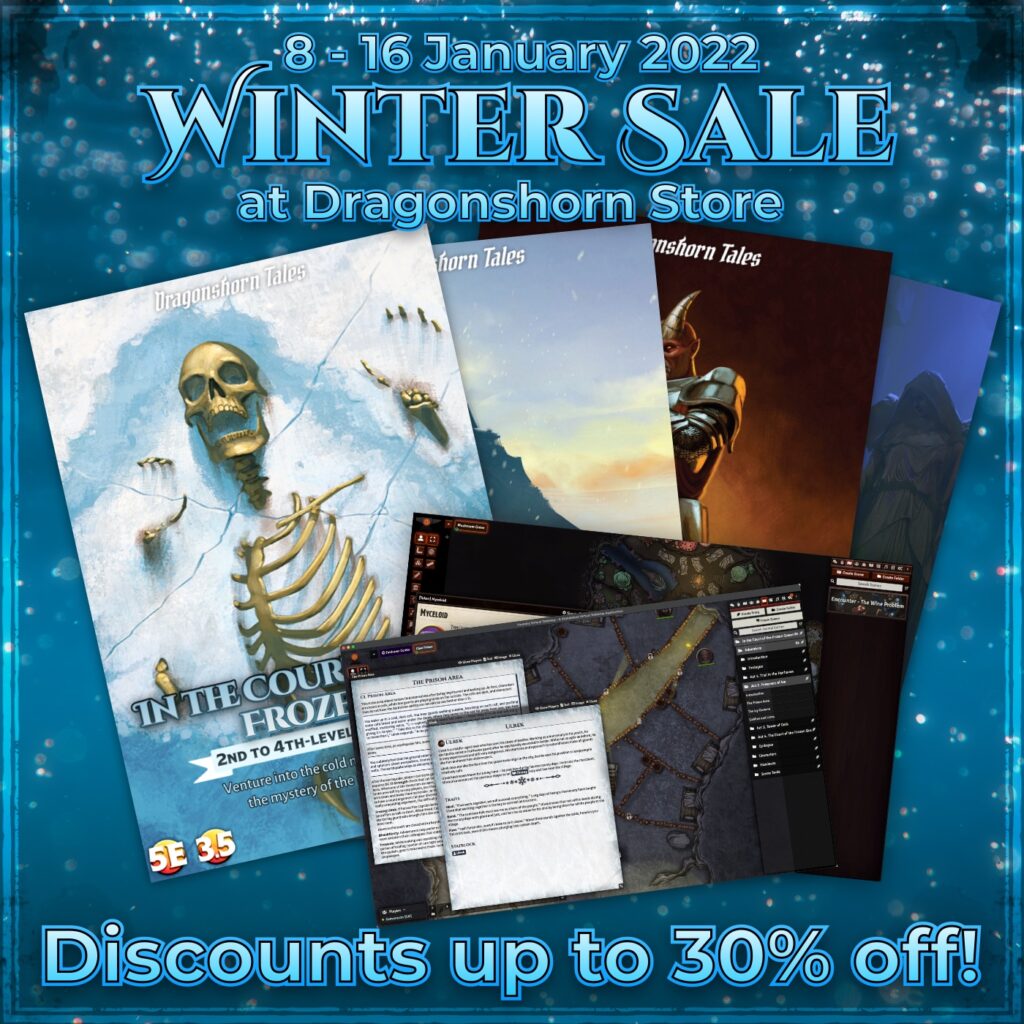 Winter Sale on Dragonshorn Store is on until 16 Jan 2022! Get 15% off all non-bundled products and an additional 10% off bundles (on top of base bundle discount – totaling over 30% off in some cases)!

Grab an encounter pack, and adventure, or even a whole bundle of content! Everything ready to be imported into Foundry VTT – or be played at your table!

January 8, 2022 Rughalt Uncategorized No comments yet

In the Court of the Frozen Queen

A cold wind stirs, rising to a gale… a wintry storm is coming. Will you uncover the secret of Fairhaven or will you freeze to death trying in this epic adventure for characters level 2 to level 4.

Something bad must have happened in the village Fairhaven. The caravan that went there is missing, and no one from the village comes to neighboring cities. Rangers report that an abandoned tower in the mountains is being rebuilt, and those who wandered close to the city tell the story of a frozen building in the middle of the city. Ice Queen arrived – bards say, cautiously telling the tale they overheard in Fairhaven – and the valley is going to freeze.

A group of adventurers gathers in the Dragon Head inn, worried about the things they heard. They do not know what they will find in the north, but they know one thing – to save the people of the valley they must go and get an audience In the Court of the Frozen Queen.

In the Court of the Frozen Queen is a full-fledged adventure. Full of mysteries to unravel, monsters to fight, riddles to solve, and magical treasures to be found! Adventure is designed around level 2 to level 4, with an optional prologue that will bring characters from level one to level two and will introduce them to the story.

The adventure is available as a PDF book and as a Foundry VTT module. You can read more about it on the adventure page In The Court of the Frozen Queen – Dragonshorn Studios

September 24, 2021 Rughalt Uncategorized No comments yet

We use cookies on our website to give you the most relevant experience by remembering your preferences and repeat visits. By clicking “Accept All”, you consent to the use of ALL the cookies. However, you may visit "Cookie Settings" to provide a controlled consent.
Cookie SettingsAccept All
Manage consent

This website uses cookies to improve your experience while you navigate through the website. Out of these, the cookies that are categorized as necessary are stored on your browser as they are essential for the working of basic functionalities of the website. We also use third-party cookies that help us analyze and understand how you use this website. These cookies will be stored in your browser only with your consent. You also have the option to opt-out of these cookies. But opting out of some of these cookies may affect your browsing experience.
Necessary Always Enabled
Necessary cookies are absolutely essential for the website to function properly. These cookies ensure basic functionalities and security features of the website, anonymously.
Functional
Functional cookies help to perform certain functionalities like sharing the content of the website on social media platforms, collect feedbacks, and other third-party features.
Performance
Performance cookies are used to understand and analyze the key performance indexes of the website which helps in delivering a better user experience for the visitors.
Analytics
Analytical cookies are used to understand how visitors interact with the website. These cookies help provide information on metrics the number of visitors, bounce rate, traffic source, etc.
Advertisement
Advertisement cookies are used to provide visitors with relevant ads and marketing campaigns. These cookies track visitors across websites and collect information to provide customized ads.
Others
Other uncategorized cookies are those that are being analyzed and have not been classified into a category as yet.
SAVE & ACCEPT